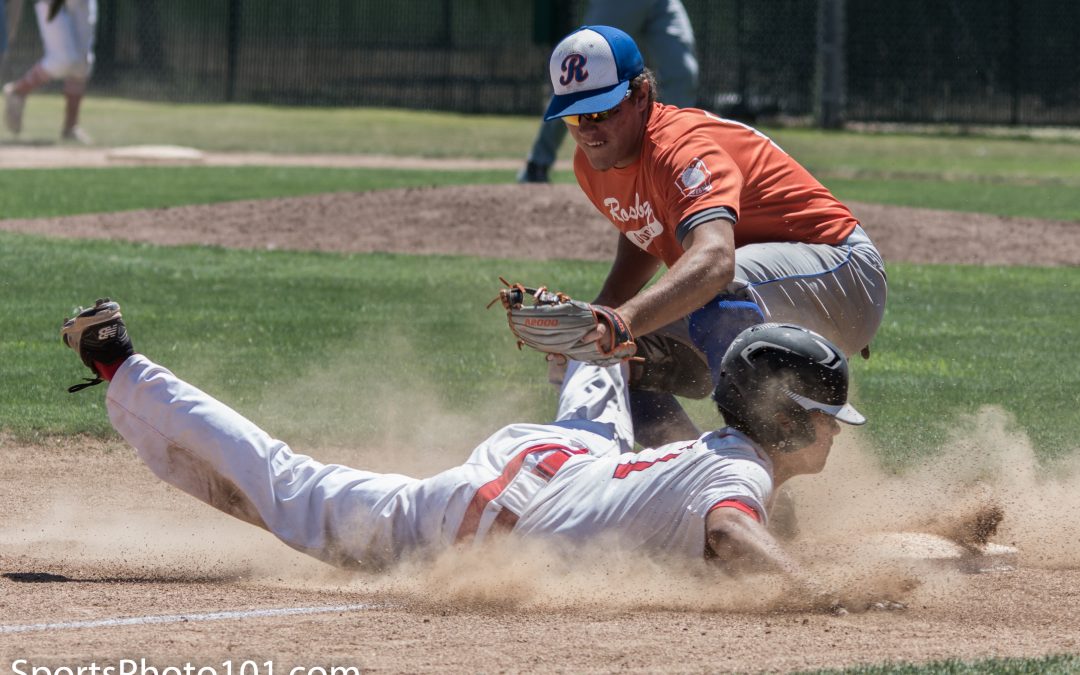 Summer leagues are a great way to stay in shooting shape when schools are out on break.  Even small cities have some type of summer league but bigger cities afford even more opportunities.  It’s also a great way to step away from the computer and get outside and shoot.

Recently I headed to Willammette University in Salem Oregon to shoot some American Legion baseball action.

It was a midday game and with clouds in the sky.  (No, it does not rain every day in Oregon.)  Midday sun causes some problems when shooting baseball. First of which is that baseball players wear hats and when the sun is almost straight up, it causes a major shadow on the faces of the players.  And no matter how you meter the shot, there is no way to fully bring out the faces.  It is best accomplished in post.

Another problem was the infields were a light colored dirt, which makes the scene brighter than the grassy areas.

I shot the game with a Nikon D7200 paired with a Sigma 150-500mm f /5-6.3 lens.  Most of the shots were shot at a shutter speed between 1000-1600 and the ISO was set at 350.  I know there are many photographers who would have just figured out their settings and never touched them the rest of the game.  However, with a variable aperture lens, there are times I need a little extra light and that explains my ISO 350.  I also sometimes like a little motion blur from the batters.  At other times I want everything frozen, which explains my shutter speed.

For me baseball is a little boring.  So, I will force myself to not stick with one set of settings.  This keeps my mind in the game.  And if you have ever covered baseball, you know you always have to be ready for the speeding foul ball coming your way.

Here are some of the photos I took.

SportsPhoto101.com is a participant in the Amazon Services LLC Associates Program, an affiliate advertising program designed to provide a means for us to earn fees by linking to Amazon.com and affiliated sites.

The purchase prices are the same is if you went through Amazon directly but, If you choose to click on the product photos, I do get a commissions, which goes to support this site.