How I Captured This Great Capitol City Classic Photo 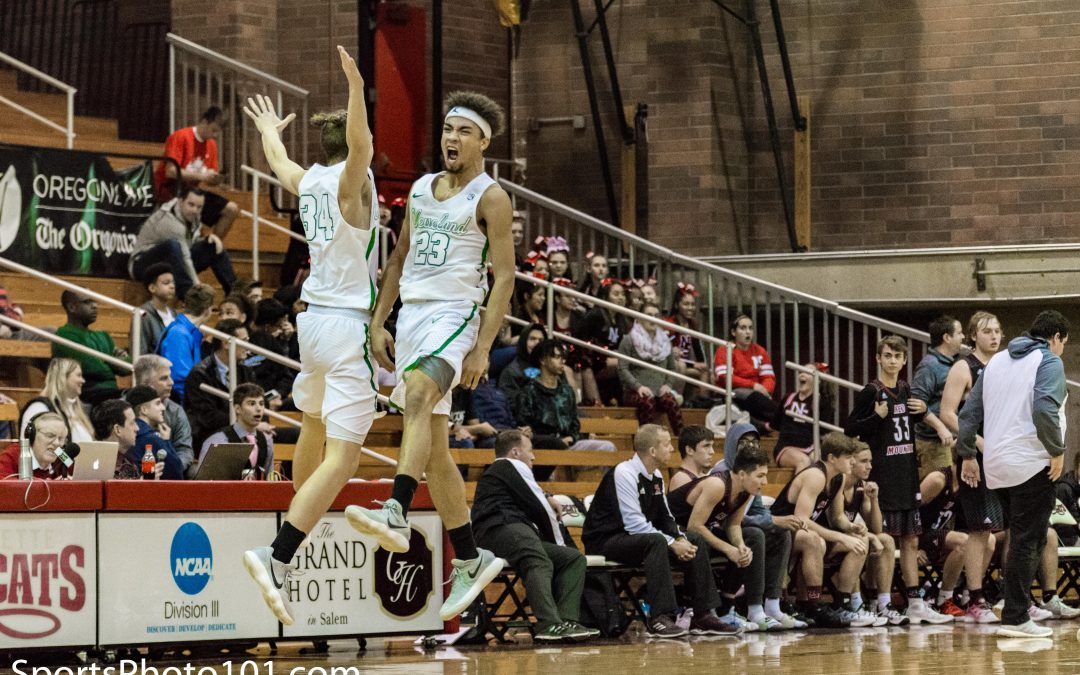 This shot was taken at the Capitol City Classic high school basketball tournament held in Salem, OR.  I have been shooting this event since it began a few years ago.  I like to shoot this event because of the high caliber of athletes involved.  Most of the teams at this event have at least one player if not two, that are NCAA DI prospects.  Having players like this offers the chance for more exciting and engaging photographs.

So, let me give you an idea of where I was located.  This tournament was held at Willamette University, which is a local small university.  Being a university gymnasium, there was plenty of room for me to locate myself under the basket.  I was seated a couple feet back from the baseline and about five feet to the right side of the basket (Left hand layup side).  This is where I spent 95% of my time due to the fact most players are right handed.

My equipment for this shot consisted of:
I also had a Sigma 50-150mm 2.8 lens.  (Unfortunately, the lens has been discontinued) However, these are great replacements.
(“Full disclosure – I am a participant in the Amazon Services LLC Associates Program, an affiliate advertising program designed to provide a means for me to earn fees by linking to Amazon.com and affiliated sites.  Purchases made cost the same as if you went there directly, but you’ll be helping to keep this site growing.”)

I had already adjusted my settings before the game started.  Therefore, I did not have to worry about making sure I had the correct settings to get this photo.  My basic camera settings were the following:   Shutter speed 1/640, Aperture f/2.8, ISO 6400.  Focus was set to auto focus, continuous shooting (AF-C) mode with D9 (9-Point Dynamic-Area) selected.

What was good about this game was that it was an exciting and entertaining game.  Sometimes, when a game is a blowout, it can be tough to concentrate and continue to get shots.  In this game though, it was the final seconds that determined the winner and the team that won did it by one point.

Obviously this is a celebratory shot.  But, I didn’t get this photo by luck.  I saw it developing and was ready to quickly turn the camera towards the celebration.  Not only was I able to get this shot but also a couple more in the sequence.

Now, one of the keys to getting this shot was court awareness.  Actually, it was more like venue awareness.  Even during time outs I was scanning and looking for shots.  So, I has aware of the following:  on court players, bench players, coaches, clock, fans, etc.  As a sports photographer it is important to stay focused on the game and keep watching for any shots that tell the story.

Another factor that allowed me to grab this photo was that I was shooting with both eyes open. Yes, both.  One eye was looking through the view finder while the other was scanning the area.  No, it’s not easy to do and it takes lots of practice.  But, once you learn the technique, it allows you to get photos you might normally miss.

Since I was using continuous mode, I was able to take several photographs in quick succession.  Usually, I don’t shoot in this manner.  But, there are times it is very useful.  This was one of those times because I didn’t know which shot would get me the best action.  I first focused on the bench players as they were leaving the bench and took about five quick shots.  Then, I quickly pointed my lens at the two isolated players and grabbed another three shots.

I also attempted to get the opposing team in the frame as well.  You will noticed the players in the white uniforms are located to the left side of the photo.   If you are familiar with the “Rule of Thirds” you will noticed how I utilized that rule.  I did this hoping to get, basically, a defeated look from the losing team’s players or coaches.

There you have it.  That’s how I was able to get this photo.

If you have questions, send me an email or voice message and I will get back to you as soon as humanly possible.

If you need help with exposure, check out my series on EXPOSURE